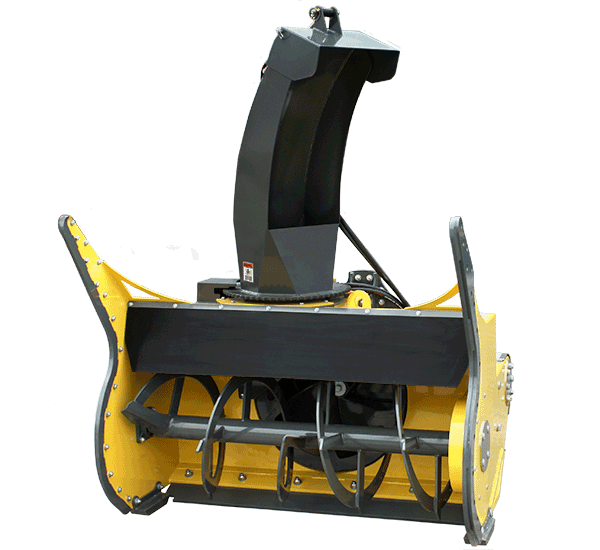 With visibility and ease of use as a platform, this Single Auger Box Blower was designed specifically for the municipalities that require high efficiency snow removal with easy serviceability and safe operation. All moving parts are enclosed from all sides except the auger.

This two stage blower has a 19” diameter open flight auger, feeding a large 24” diameter 5 blade impeller. Snow is quickly discharged through the chute as it is curved precisely to obtain the maximum casting distance as well as control the snow when discharging beside the snowblower, such as when clearing sidewalks. 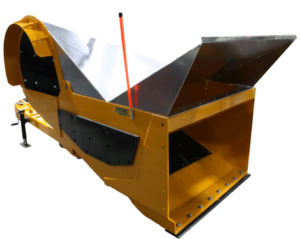 Design and build a device to remove built up snow, ice and anti-ice materials from side roads and highways. This build up is not removable by regular highway snowplows because the attack angle on the plow blade is too great. The build up is often left until spring and swept away or removed via a snowblower and working crew in front and behind the snowblower.

Removes build ups at speeds of 60 km/h or more without the use of any hydraulic/moving components. This device has been designed to receive the snow in the front and use the travel speed of the carrier vehicle to direct the snow into a funnel and it is ejected out the side.

The frame uses oil filled plastic wear blocks to allow the two weldments to freely slide between each other. The frame also has oscillation (to compensate for any unevenness in the road surface) via a large center bolt and bushing. Shock absorbers in the form of coil springs were also fitted to the frame, in case an object such as a large block of ice is struck. A top link was used to adjust the angle between the frame weldment and the intake/exit weldment.

At maximum capacity (throat opening) at 60 km/h, this device can displace 52 400 cubic yards of snow per hour. A snow blower at the same throat opening and a travel speed of 6 km/h would only displace 10% of the amount of snow in comparison to this device.